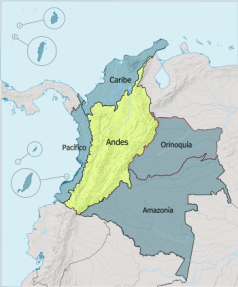 The Colombian Andes is one of the five major geographical and cultural regions in which the country was divided in an attempt to understand its physiographic and sociocultural diversity.

Generally speaking, the notion of Colombian Andean music comprises an instrumental ensemble of plucked strings (tiple, bandola, guitar) and occasionally small percussion. This format has become widespread throughout the region, mainly being used to perform pasillos, bambucos, guabinas, dances. These music genres and their repertoires coexist between the traditional-popular and academic worlds, with clear tendencies towards the chamber music paradigm.

Scroll down for more information about specific topics:

The tiple is a plucked string chordophone of the guitar family mostly associated with Colombia, and considered the national instrument. It is slightly smaller than a guitar, with 12 strings grouped in four tripled courses. The first group consists of three steel strings. The other two groups have a copper string (or wound brass) in the middle of two steel strings.
The normal tuning from highest to lowest course is E B G D. Tiples are usually tuned in concert key but a Bb tuning was used in the past decades. The outer two strings of each of the three lowest triple courses is tuned an octave higher than the middle string in the course. With a 19-fret fingerboard, the Colombian tiple has a range of about 2-2/3 octaves.
The role of tiple can be as harmonic accompaniment instrument but it can also assume a melodic or a solo role. The main use of tiple is in Andean Colombian music with bandolas and guitars. The normal technique for sound production is with nails of right hand. In melodic contexts, it can played with plectrum. One ot the most idiomatic sound in the accompaniment role of tiple is named “aplatillado”, that can be translate as “as a cymbal”, and is made muffing softly the sound of the string with nails. 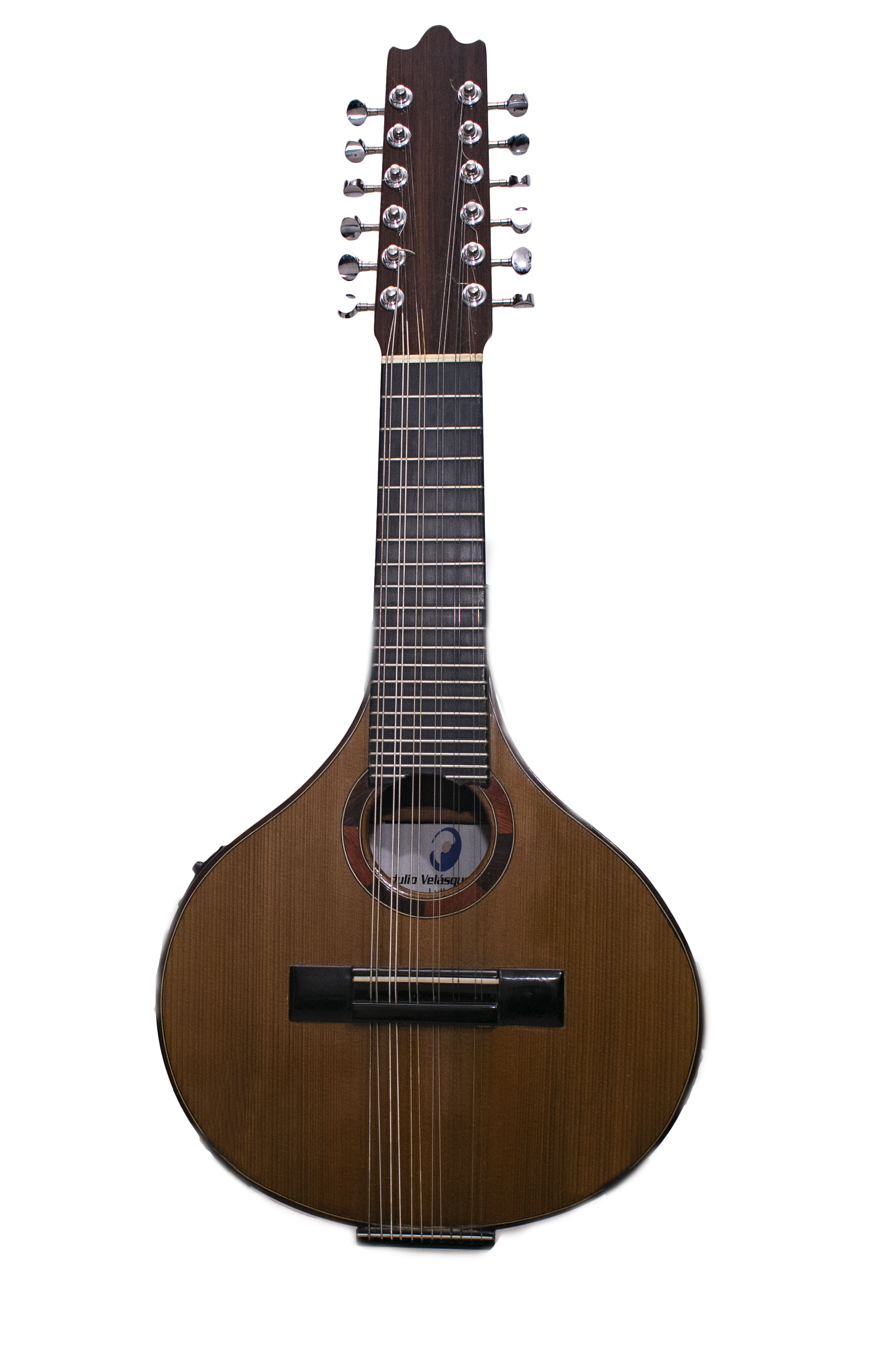 The Andean Colombian bandola is a plucked string chordophone of the lute family mostly associated with the Andean region of Colombia (there are other kinds of bandolas in other regions of South America). Its shape is derived from Peñola’s vihuela (a vihuela with pear shape). In the Andean Region it is possible to find two varieties of bandolas, one with 16 strings and one with 12 strings. The second one is the most common kind and has its strings grouped in six double courses. The first and second courses are made of steel; the other courses are made of copper or wound brass.
Bandolas are usually tuned in concert key but a Bb tuning was used in the past decades. The normal tuning (in concert key) from highest to lowest course is G D A E B F# and the range is about 2-2/3 octaves with almost 19-fret fingerboard.
The main role of this instrument is melodic but it can be used as a solo instrument. The normal technique for sound production is the use of a plectrum but sometimes the nails are used to achieve special effects.
The main use of Andean Colombian bandola is in Andean Colombian music for string ensembles with bandolas, tiples and guitars. 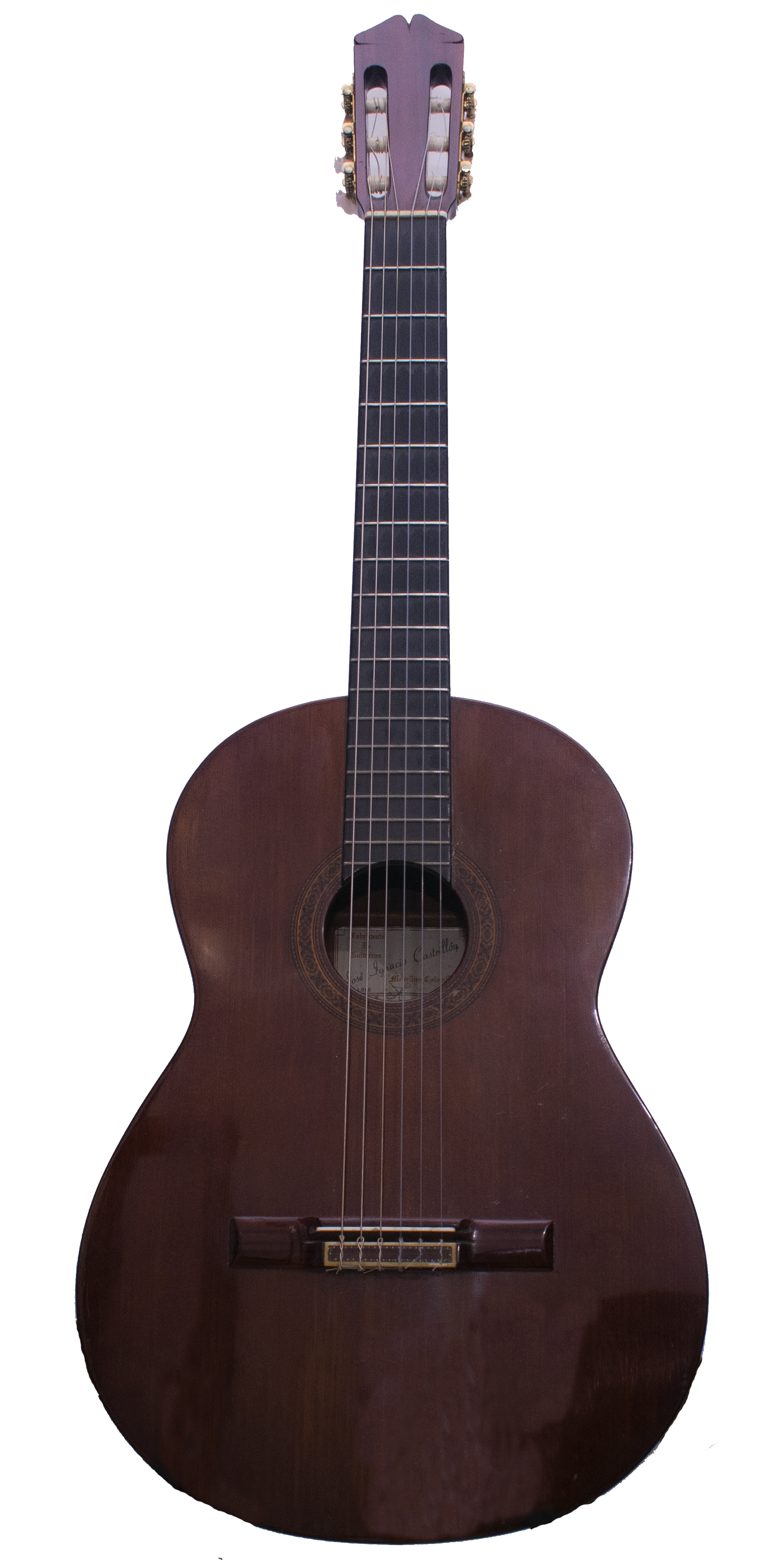 The rhythms (genres) performed in Colombian Andean music can be broadly categorized in 3 types: